How to Increase Ad Viewability in 8 Easy Steps in 2023

According to Think with Google which is part of Google Ad Manager, 56.1% of all ads are actually not viewable.

Just imagine the plight of advertisers spending tons of money on ads when they see this statistic.

All of that money that advertisers spend on digital advertising would just go to waste if their ads are not seen by the intended audience.

So, to get the best out of your PPC campaigns, you need to ensure that your ads have a high viewability on web pages.

So, let's find out how you can increase ad viewability with just 8 easy steps to increase your ad revenue.

What is Ad Viewability?

The term “ad viewability” simply refers to how visible your ads are to viewers and for how long.

It helps digital advertising marketers track the actual number of impressions that their ads actually get from users.

Viewability is measured in two parts—the portion of an ad that is visible and the duration for which it is visible.

An ad is said to be viewable if at least 50% of it is visible for at least one second for display ads and for two seconds for video ads.

Why is it Important?

The ultimate goal for any ad campaign is to get more clicks on ads and get conversions resulting in more ad revenue.

But how will you get more clicks that lead to increased ad revenue if people are not even viewing your ads, let alone find them relevant?

All that time and effort that you spend on crafting the perfect ad copy and adding calls-to-action will go to waste if people don’t even view your ads.

This is where viewability comes into the picture.

This is the first step to ensure the success of your ads and get that increase in ad revenue that you hoped to achieve via an ad campaign.

To get a higher click-through rate and, eventually, higher conversions, you need to first ensure that your ads are viewed by more people for more time.

This is a crucial factor in getting the best ROI from your ads and, hence, should not be ignored.

How to Increase Ad Viewability

There are numerous factors that affect viewability and that should be considered while trying to boost the number of views that your ads get.

Here are some of the key factors that can help you boost your ad viewability:

According to the advertising platforms data collected by Google, bigger video ads do much better than smaller ones. 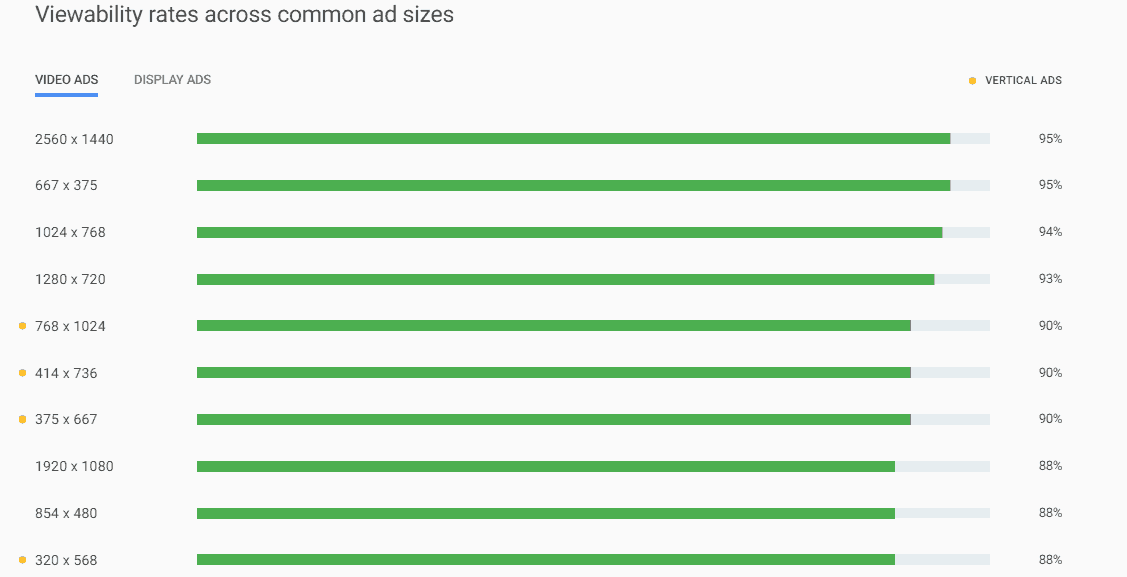 For display ads, smaller ads do better than larger ones, but the preferred layout is horizontal.

As you can see from the data below, ad viewability for display ads is much higher for small, horizontal ads than that of vertical ads. 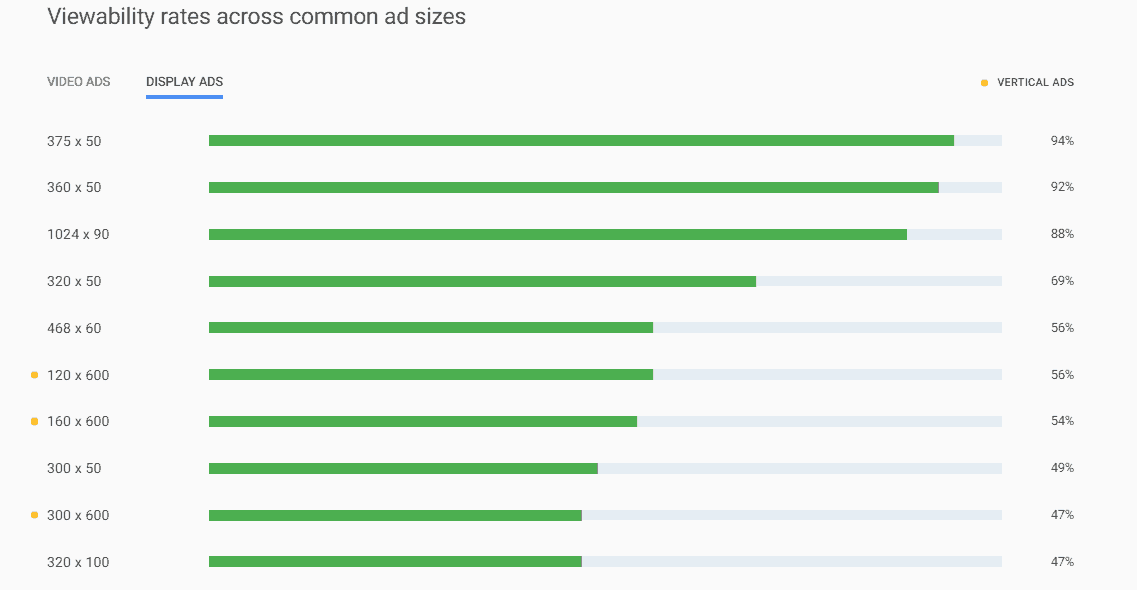 The position of an ad on a page also affects ad viewability. According to the previously cited Google study, ads that are placed above the fold on web pages have much higher ad viewability than those placed below the fold.

However, this does not mean that you should completely rule out below-the-fold ads.

Because the ad viewability is lower for these ads, these spots are available for lower costs than above-the-fold ads. And they still have a decent >40% ad viewability, so, are still useful.

So, it is up to you to maintain the balance between cost and ad viewability.

But, if budget is not a constraint, then a sure shot way to boost ad viewability is to place the ad above the fold on web pages.

The amount of time it takes for a page to load is a key factor that determines whether or not viewers will see your ad or not.

People often do not have the patience to wait for a page to load and move away without reading the content or seeing the ad.

So, it is important that you ensure that your pages have low page-load times, to avoid losing viewers because of a page-load delay.

Also, use asynchronous calls for your ads so that your ads load simultaneously with the page content.

If ads take longer to load than the rest of the content, there’s a good chance that readers will move on before seeing the ad.

The shorter your page length, the higher is your ad viewability. This is similar to the reason why above-the-fold ads do better—that people often don’t bother to scroll down to multiple pages.

So, placing your ads in short, one-page content results in higher ad viewability as it is easier for readers to go through single-page content.

A responsive ad design adapts according to the device that the ad is being viewed on.

This is important because an ad that is not responsive might break or not display properly on different devices.

It is especially important for you to optimize your ads for mobile devices because they have higher ad viewability than desktops.

Ad viewability differs across the various publishing channels and choosing the right channels can help you get more active views for your ads.

For instance, video ad viewability is highest for YouTube ads and is much lower for web or in-app video ads.

A lot of advertisers use fixed ads to maximize active views and impressions. Fixed ads are those that stick to their position and are displayed at the same place even if a user scrolls down the page.

These types of ads are also called sticky ads, as they stick to their position even when someone is scrolling up or down the page.

These types of ads have a higher chance of getting viewed because they stay in sight longer. As a result, ad revenue increases.

The design of your web page is another factor that affects an ad’s viewability. If you have a cluttered and complicated page with lots of different elements, the ads will not get much visibility.

However, if you maintain a clean and simple page design, so that both the content and ads are clearly visible, it will improve your ad views.

So leverage these techniques to get the best out of your PPC campaigns and increase your revenue.

Know of any other ways to get more views for ads? Let us know in the comments below.

What is Digital Marketing? Everything You Need to Know