Diffusion of innovations is a theory that seeks to explain how, why and at what rate new ideas and technology spread through cultures. This theory was first studied by a French sociologist Gabriel Tarde in 1890.

In 1962 Everett Rogers published the book “Diffusion of Innovations” where he synthesized research from over 508 diffusion studies and produced a theory that proposed 4 main elements that influence the spread of an idea.

An idea, practice or object that is perceived as new

The means by which messages get from one individual to another

He also outlined  the following adopter categories that reveal the percentages of the types of participants that are involved in the innovation cycle. 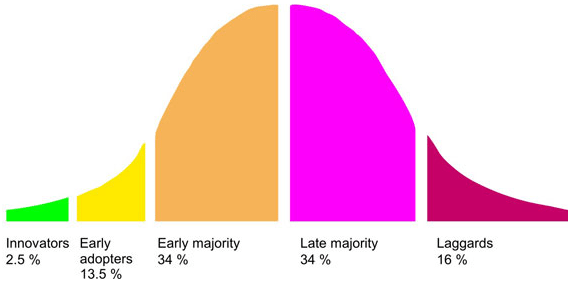 The Google+ Project has drawn the innovators and early adopters into its web and  it is producing activities that have surprised myself and others.

As I have been involved with using Google+ in its initial field trial stage I have been able to observe as well as participate as people started entering Google+. As I started prodding its features and watching the crowd I noticed revealing activities and behaviors that were different it seemed from my experiences on Facebook and Twitter.

The field trial by nature and design attracted the innovators and early adopters that will tweak every knob and play with every shiny new object within the new environment.

One of the first things I noticed was the high level of engagement and interaction that Google+ ecosystem seemed to facilitiate. Posts and updates seemed to drive comments and interactions at hyperactive levels with 70 or 80 responses being created over a very short time frame.

Mashable ran an experiment to compare Facebook engagement with Google+ engagement and the results verified my anecdotal observations.

Mashable started discussions on both platforms about a study that claims 34% of iPhone users think they have 4G. The posts were published at roughly the same time and had similar prompts, posing questions about the study’s results.

The difference is significant with Google + receiving 321% more approvals and 290% more comments than Facebook, which is highly significant statistical difference.

Their comment regarding the results was “Granted this is only one post of many, but it’s still quite telling”

Chris Brogan in a recent post commented on this phenomena and his anecdotal observation was that posts seemed to drive 3 times the activity he had experienced elsewhere.

Google+ seems to be a more natural platform for conversations.

This is my take on the Google+ and the key elements that are producing this marked difference in engagement.

1. The Google+ Project is currently highly populated with innovators and early adopters that are both influential and very active and are poking and prodding the new levers.

3. The speed  of the Google+ channel . It seems to be almost Twitter like in real time updating to the Google+ stream which keeps the topic hot (it would be interesting to compare the lag times between Facebook, Twitter and Google+ on updates into the streams on each channel)

4. It is not limited to 140 Characters like Twitter and so encourages people to interact more naturally rather than think long and hard about how to make it fit to the 140 character limit.

5. It is more engaging because it is multi-media rich in real time

6. The inviting ‘red button” hinting at more notifications is compelling and addictive (according to a comment from Nancy Loo after I posed this question on Google+)

7. The “shiny new toy” effect.  People are curious about this new Google social network so if they had to choose between the new or old toy, they want to play with the new one. (Thanks David Polykoff)

This is indeed a second generation social network that is taking online engagement to new levels through good design and technology that truly ‘works’ and is intuitive and highly responsive in real time.

This is No Accident

My bet is that this is no accident, this has been designed by Google to happen from day one.

They have taken the issues such as time lags, privacy and ease of use that have been learnt from Twitter and Facebook and other social networking channels and invented a better mousetrap.

Why do you think Google+ drives such high levels of engagement?

Do you run a website and often wonder how your site is performing compared to the websites of your competitors If you answered yes, then you are in the right place In this weekly roundup, we've curated a list of 21 of the most effective...
Read More [...]

6 Of the Best Clickfunnels Alternatives For 2020

If you are in the business of selling, then you know how hard it is to get prospective customers to buy instantly The sales process takes place in various stages as you convince cold prospects to spend their money on your product It’s also your...
Read More [...]

READY TO BE AN
INSTAGRAM INFLUENCER?
GET STARTED FOR FREE!

Learn the Process to Making Cash with Your Profile
Start Getting FREE Products
Stop waiting for BRANDS to Contact You
Stand out to BRANDS Looking to Hire Influencers!
Avoid the BIGGEST Mistakes Most Influencers Make!
Say “NO” to the boring 9-5 cubicle life!
CLICK THE BUTTON BELOW TO START FOR FREE

No. I’d rather be basic

Accomplishing your dream of being an influencer
Getting free products, services and extra income
Living a life with the freedom to do what you want
A chance to win a FREE Scholarship to the course
If you’ve reconsidered then sign-up for free below: