Google+ Pulls In 20 Million in 3 Weeks

When Google Inc. launched its Google+ social-networking site three weeks ago, executives handed out sailor hats to the hundreds of employees working on the project, symbolizing their year-long journey to that point.

So far, the sailing has been mostly smooth. On Wednesday, Web-traffic watcher comScore Inc. estimated Google+ has had 20 million unique visitors since its launch, including five million visitors from the U.S. A Google spokeswoman declined comment. 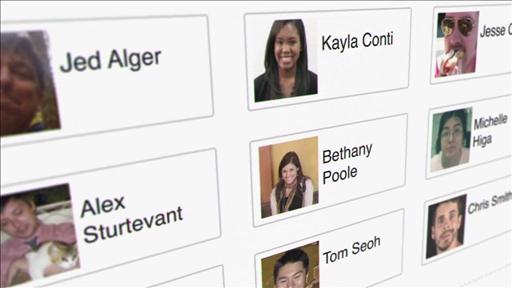 ComScore, whose estimates are based on a “global measurement panel” of two million Internet users, similar to the approach Nielsen uses to measure television ratings,doesn't have data on the number of minutes people spent on Google+.

Still, the growth of Google+ has impressed observers because access to it is by invitation only, meaning people can join only if a current member invites them. And the company hasn't yet marketed the service to the more than one billion monthly visitors who use its search engine, Gmail and other services.

Google+ lets people share comments, articles, photos and videos with various “circles” of friends or contacts, or they can share content publicly with any userwho wants to view their posts. Eventually, Google plans to incorporate features of Google plus in its other services, such as its YouTube video site.

“I've never seen anything grow this quickly,” said Andrew Lipsman, vice president of industry analysis at comScore. The only other site that has accumulated as many new visitors in a short period of time is Twitter in 2009, he said, “but that happened over several months.”

The new data follow comments by Google CEO Larry Page last week that Google+ had more than 10 million users.Mr. Page said Google plus's traction was evidence that there are “more opportunities for Google today than ever before.”

With Google+, Google is aiming to match rivals like Facebook, which used personal information posted by its members to create a multibillion-dollar advertising business that lets marketers target specific demographic groups or people with certain interests. Google also hopes the service can become a home for brands and celebrities.

The data Google obtains about people's interests could also help it change the way its Web-search engine works. Sites in its search results could potentially be ranked based on what users and their friends like or find useful, Google engineers have said. 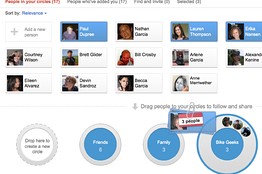 ReutersA screen shot of the Google plus social network is shown in this publicity photo. 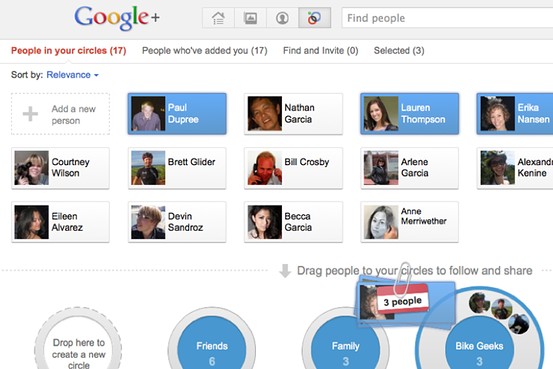 In addition to adding numerous features over time, Google will eventually allow software developers to create “social” games and other applications that would run on top of Google+, similar to Facebook's successful “platform” for applications, people familiar with the matter have said.

Google+ also has unique technology, such as a “hangouts” feature, that lets people do “video chats” using their computer webcams, speaking to numerous friends simultaneously. The company plans to include Google+ in its suite of online software for businesses.

In an email to investors Tuesday, Barclays Capital equity researchers said that “given positive initial traction from users we believe Google is now better positioned to compete and integrate social cues across its products than before, which could drive increased relevancy in search going forward.”

Even some privacy advocates who lambasted Buzz, Google's prior social-networking effort, have lauded Google+. “The product has been designed to make it easier to share with one group of your friends while retaining some measure of privacy with respect to your family, coworkers or other groups of friends,” said Peter Eckersley, a senior technologist at privacy-advocacy group Electronic Frontier Foundation, in an email.

But Mr. Eckersley added: “Google+ won't be as good for protecting your privacy against Google or against governments or lawyers with the power to compel Google to turn over your information.”

Ben Hopper, a 29-year-old photographer in London who joined Google+ just after it launched, said “it feels a little empty right now” compared with Facebook, where he has more than 4,000 “friends.” But he said that he “needs to be everywhere to show my photography,” and if Google+ becomes integrated with Gmail, Google's email service, “for me it will have the upper hand.”

14 of the Best Ways to Optimize Your Social Media Presence

Optimizing the presence of your business on social media is crucial for anyone who wants to succeed in the online world Today, this is even more important because other brands are also trying to catch your audience's attention at the same time With...
Read More [...]

Did you know that headlines can make a huge difference to your content Headlines are the first thing that people see before reading any content And, these are what determine whether or not they will go ahead and actually read your content That...
Read More [...]

READY TO BE AN
INSTAGRAM INFLUENCER?
GET STARTED FOR FREE!

Learn the Process to Making Cash with Your Profile
Start Getting FREE Products
Stop waiting for BRANDS to Contact You
Stand out to BRANDS Looking to Hire Influencers!
Avoid the BIGGEST Mistakes Most Influencers Make!
Say “NO” to the boring 9-5 cubicle life!
CLICK THE BUTTON BELOW TO START FOR FREE

No. I’d rather be basic

Accomplishing your dream of being an influencer
Getting free products, services and extra income
Living a life with the freedom to do what you want
A chance to win a FREE Scholarship to the course
If you’ve reconsidered then sign-up for free below: