The Right Time to Post on Social Media: A Reliable Guide

Social media is a blessing for all businesses. If you get your social media marketing strategy right, you can boost your brand’s visibility and engagement.

There are 3.34 billion active social media users around the world. With so many people on social media, it provides an excellent platform for businesses to engage with their audiences.

But all social media users log in from different time zones at varying times. Social media is extremely dynamic. If you want to engage all of your audience, you need to make sure that your posts appear in their feeds at the right times.

So, what is the right time to post on social media?

This dilemma is often experienced by marketers around the world. However, there is little consensus among different studies conducted about the optimal time to post on social media.

Let’s take a look at what different studies have to say about the best time to post on social media.

What Factors Affect the Best Time to Post on Social Media?

Each social media platform has a different appeal and targets different sets of people. For instance, Instagram is a highly visual platform and is used mainly by people under the age of 35.

On the other hand, 45% of article readers on LinkedIn are people in upper-level positions, including directors, VPs, and C-level executives.

What does this tell you?

It suggests that each social media platform has varied user personas. Because of this, the browsing habits of users on these platforms are different. You can’t use a one-size-fits-all approach to find the right time to post on social media.

**Time zones are an important factor when you consider when to post on social media. In this article, I’ve mentioned a study from CoSchedule, which has taken into consideration Eastern and Central Time Zones. Another study that I’ve quoted throughout the article is from Sprout Social, and it has taken into account only the Central Time Zone.

Let’s look at how the right times to post on social media vary across different platforms.

Being the largest social media network, Facebook boasts more than 2.32 billion monthly active users. People use Facebook on mobile phone devices as well as computer screens. They use it for work and leisure. In short, the usage is varied.

Before we delve into the right time to post on this social media platform, let’s take a look at the user demographics of Facebook. According to Statista, male users in the age group of 24-35 comprise the largest demographic group on Facebook as of April 2019. 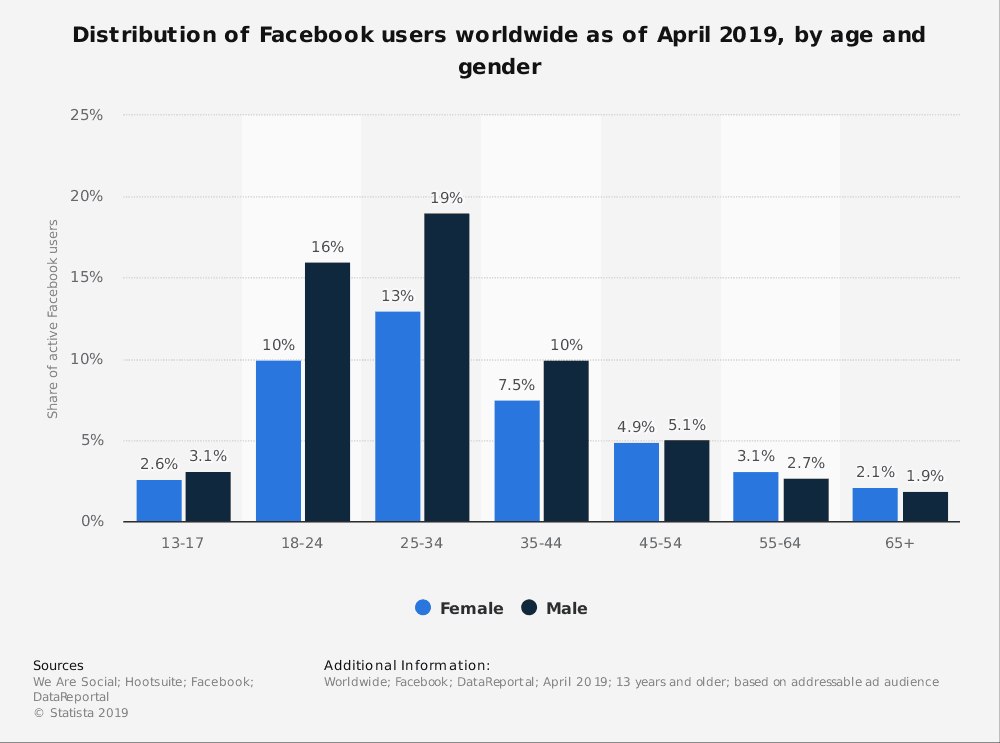 When it comes to location, most Facebook users are from India, the United States, and Brazil. Another study by eMarketers showed that U.S. adults spend an average of 22 minutes on Facebook every day. The study also showed that people used Facebook mostly via mobile phones and tablets. 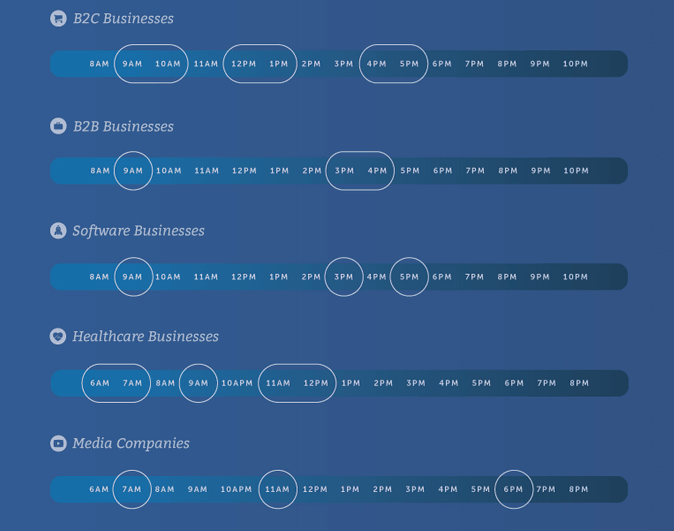 Before we get into the right time to post on Instagram, let’s understand who actually uses this platform.

Just like Facebook, Instagram’s user base is young. A majority of Instagram’s 1 billion users are under the age of 35. Around 60% of users say that they use Instagram daily. 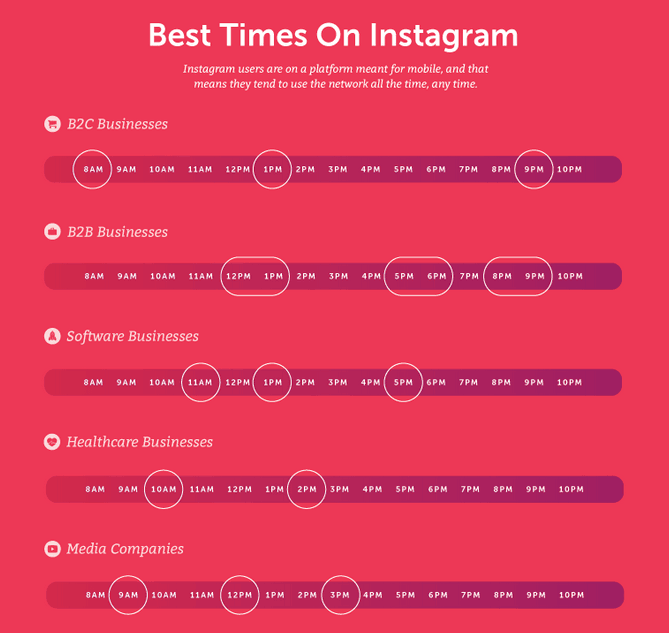 The Sprout Social report also shows that engagement peaks mid-day on Instagram. However, even posts uploaded during evenings and mornings in the middle of the week also tend to do well.

According to Sprout Social, the best time to post on Instagram is Wednesday at 11 am. The time frame between 10-11 am on Fridays also works equally well. Instagram sees the least amount of engagement on posts on Sundays.

On other days, the time frame between 11 pm to 3 am is not very engaging.

Let’s first understand the audience demographics on Twitter before we discuss the best time to post on this platform. 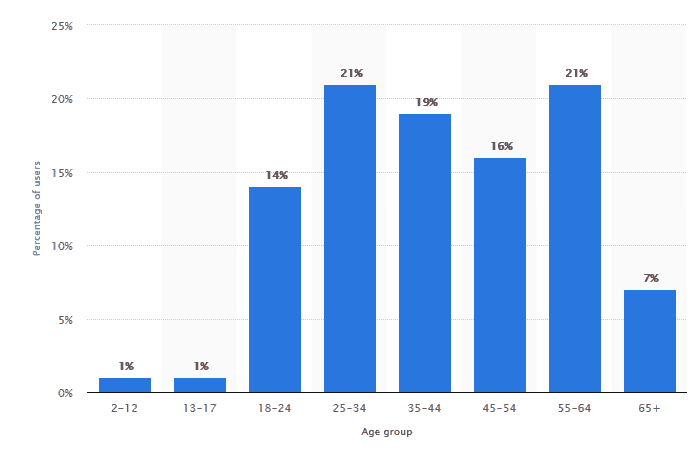 Twitter’s audience demographics are different from other social media networks. That’s because along with a young population, Twitter also appeals to older generations. 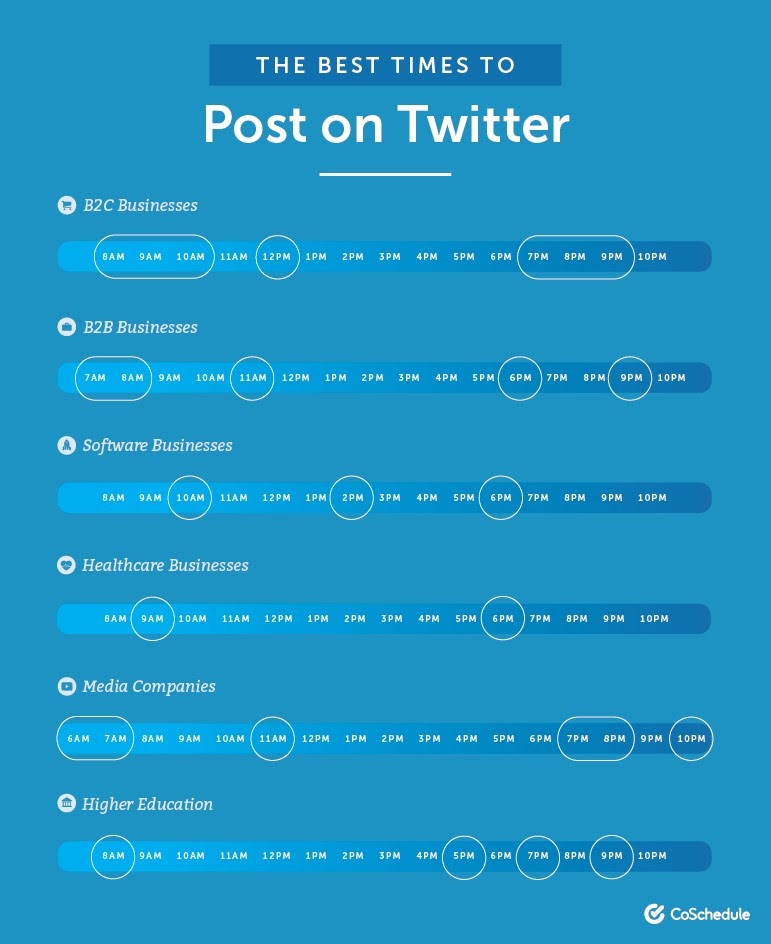 Twitter tends to heat up early in the morning and then picks up again late in the evening. The CoSchedule report suggests that the best time to post on this social media platform is between 8-10 am or 6-9 pm.

However, the Sprout Social report asserts that Twitter is most active in the morning. The best time to post on Twitter is 9 am on Wednesday or Friday. If you want to avoid low engagement, you should skip the time frame between 10 pm to 4 am on all days. Mid-week is the best time to post, while Saturday sees the least engagement.

When Is the Right Time to Post On LinkedIn?

LinkedIn does not enjoy the same level of popularity as other social media platforms. According to a report by the Pew Research Center, only 26% of adults use LinkedIn. However, 46% of all LinkedIn users in the U.S. boast of an income of more than $75,000. 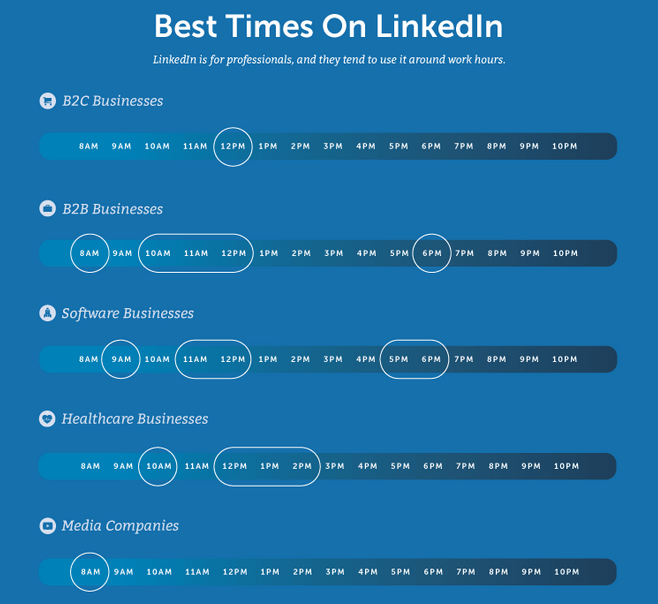 LinkedIn: Here is the Best Time to Post on Social Media

Since working professionals use LinkedIn, Sprout Social found that most activity on LinkedIn is concentrated on working days. The best time to post on this social media platform is 9-10 am or 12 pm on Wednesday.

Before we find out the best times to post on Pinterest, let’s understand the audience demographics on this platform.

Pinterest has always been marked as a platform that appeals more to women. The social media site has a total of 250 million monthly users.

According to Pew Research, 41% of women said that they used the site. In contrast, only 16% of men said the same. In addition to this, Pinterest was most popular among the age group of 30 to 49 year olds.

Pinterest’s algorithm makes it mandatory for you to know the best time to post on social media if you want more engagement. Because of Pinterest’s Smart Feed, not all the Pins you post will be seen right after you publish them.

In the algorithm, the quality of the Pin is a crucial factor to ascertain whether it would be added to the SmartFeed or not. To get your Pins ranked, you need to get user engagement. The best strategy to follow for Pinterest’s algorithm is to post at the best time when you’re likely to get more engagement.

Pinterest users seem to like browsing the social media network in the evening or in the wee hours of the morning.

Unlike other social media networks, people tend to stay away from Pinterest when they are at work. So, any time between 9 AM to 5 PM is definitely not a good time to post on this social media platform.

CoSchedule tells us that, when it comes to Pinterest, the best time to post on social media is anywhere between 8 PM to 11 PM. Alternatively, you could also get more engagement between 2 AM to 4 AM as it’s another active period on the social media platform.

When are they most active?

Let’s get answers to these questions in order to identify the best times to post on this platform.

YouTube is the second most visited website after Google and is also the second largest search engine. In addition to this, it has the second highest number of active users of all social media platforms after Facebook.

That’s enough to gauge the fact that YouTube is immensely popular. But which audience demographics does it appeal to most?

According to a study by We Are Flint, YouTube was the most used social media network in the age group of 18 to 44 year olds. So, it’s not just a channel meant for millenials.

So, what’s the best time to post on YouTube? The answer to this question varies depending upon whom you ask.

One of the most quoted studies on this subject was done by Fredericks Networks. Even though the findings are from 2015, it’s still the most widely quoted study.

According to it, the best time to post on YouTube is between 12 PM to 3 PM on Thursdays and Fridays. This is because viewership begins to increase on Thursdays and is at its peak on Saturdays.

By posting videos a bit ahead of the peak time, there is a better chance to get them indexed. By Sunday afternoon, the viewership begins to taper off and bottoms out on the first three days of the week.

Based on the usage data, social media platforms do show spikes in engagement and activity at specific periods. However, how much engagement your posts get depends on the quality of your content and your audience base.

What do you think is the best time to post on social media? Please share your views in the comments section.

GetEmails vs. OptinMonster: Which Tool Is Better To Get More Leads?

If you’re looking for the best lead generation software program, you may be faced with the following dilemma: GetEmails vs OptinMonster — Which one should you choose Both are top-notch programs It can be difficult to decide which one is...
Read More [...]

Zutrix Review 2022: Is It a Good Rank Tracking Tool?

Zutrix Review: The Summary Box Zutrix is an AI-powered Google Rank Tracker that uses complex algorithms to track your keyword positions with accuracy It offers a suite of tools to get keyword suggestions and detailed white-label...
Read More [...]

The unsurpassed growth of social media in the 21st century as a platform for advertising has completely redefined Internet marketing for businesses of all sizes From Facebook and Twitter to Instagram and LinkedIn, businesses have more pathways for...
Read More [...]