Marketing Memes: How to Use Memes in Marketing to Gain Traction

Memes are native on social media platforms. They are funny, entertaining, and easy to consume. But there is more to them than meets the eye as Richard Dawkins repeatedly said.

The practice of meme marketing led to the birth of a new term: meme-jacking. When marketers hijack popular memes or funny memes to market their products, it’s called meme-jacking.

Meme-jacking is becoming increasingly popular because it’s an excellent way to share refreshing content that has the potential to go viral. Just think about it, who doesn’t like a hilarious meme?

Disclosure: This content has a few affiliate links, which means if you click on them, I will get a commission (without any extra cost to you).

How Are Brands Using Memes for Marketing?

An average person spends an hour and a half every day on social media. And memes are the language in which people on social media communicate new ideas and attitudes.

So, it’s not surprising that memes have become a cultural phenomenon. Grumpy Cat, Good Guy Greg (GGG), and LOLcats all have one thing in common — they’re all meme characters that are now a part of internet pop culture and meme culture in general.

They’ve been used in different ways to spread various ideas. They do so by building on the social media appeal of cat videos and making them even funnier.

Meme marketing can breathe new life into your social media strategy. Memes are highly visual, making them a great tool to create social media fodder and add to your content marketing strategy.

The best part of meme marketing is that you can simply take a concept that is already gaining traction and piggyback on its popularity. With memes, there is no such thing as plagiarism.

Creating funny memes gets simpler with image editor and animation maker tools such as PixTeller. This design tool allows you to create animated GIFs, quote pictures, and video stories with easy-to-use templates.

You can capitalize on a trending meme and customize it with your branded content to engage your target consumers with an entertaining media strategy.

With the least amount of effort, your share-worthy memes can get you likes, shares, and comments. When you post them on your blog, you can reap the benefits of increased inbound links and website traffic as well.

No wonder brands are jumping in on the meme marketing bandwagon.

Are you looking for real-life meme marketing examples?

Here are a few brands that have been marketing with memes:

Gucci is a luxury fashion brand that’s built an image around sophistication and grace. But for their 2017 #TFWGucci campaign, they decided to shatter all preconceptions about their brand. With memes, they showed their target audience that they could be hip.

What was their #TFWGucci campaign all about?

#TFWGucci, which is short for “That Feeling When Gucci,” was a campaign designed to promote their new line of watches. 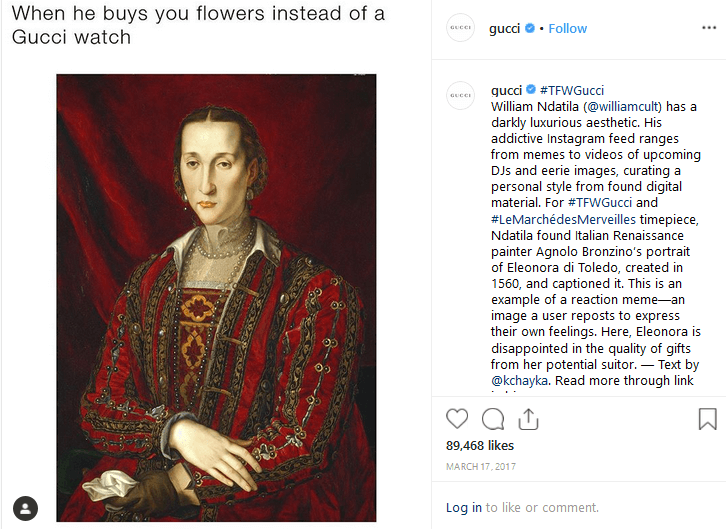 In a series of relatable memes, Gucci used memes that ranged from absurd to hilarious. They created all of the memes in collaboration with artists from around the world.

The landing page for the campaign even featured an explainer video on the history of memes for those who were new to the concept. The descriptive captions paired with edgy graphics gave Gucci a refreshing brand makeover.

Seamless, the popular online food delivery service in the U.S. often uses humor on social media to connect with their audience.

In 2014, they came up with a creative concept for marketing memes. They created a series of memes based on nominations for Academy Awards. Called the #OscarNomNoms, Seamless’ meme-series created quite a stir on Twitter. 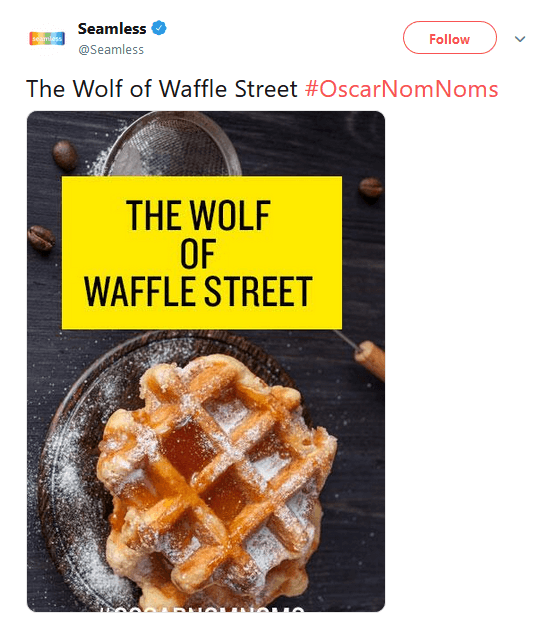 They re-imagined and designed movie posters to include some crazy food puns. American Hustle became “American Muzzles,” while The Wolf of Wall Street became “The Wolf of Waffle Street.”

What were the results of the meme marketing campaign?

Needless to say, the #OscarNomNom series won the internet. Their memes went viral for two reasons — timeliness and good puns.

The Academy Award nominations were just announced, so obviously, there was a lot of curiosity around them. By leveraging a popular trend, Seamless was able to position itself as a brand that could make people laugh.

New York-based subscription service, BarkBox, has over 600,000 monthly subscribers for their dog products and services. The one thing that their target audience has in common is their love for dogs. 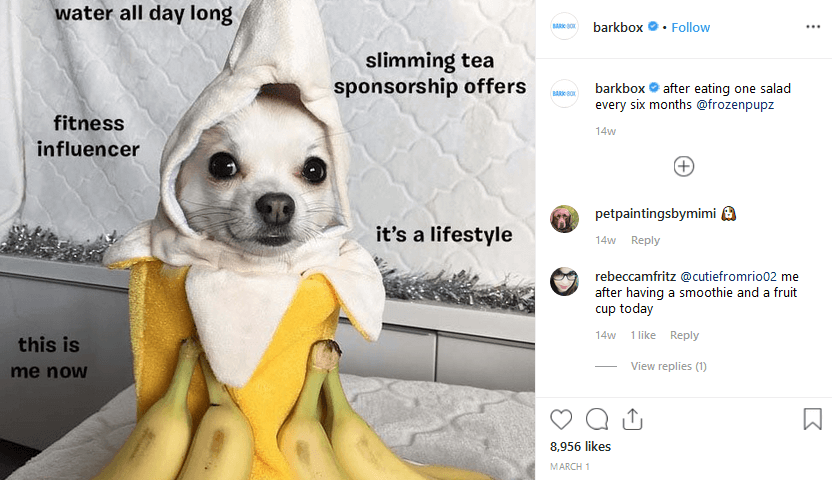 BarkBox recognized this and they leveraged dog memes in their marketing strategy to engage their audience. Instead of promoting their products, they use memes to bring the whole community of pet lovers together.

Because of the relatability of their memes, their followers often tag their friends and comment on the social media posts.

You’ve seen what meme marketing looks like. But how do you go about creating marketing memes? It’s not rocket science.

There are no set of rules to be followed when it comes to meme marketing. But you need to keep a few things in mind while creating marketing memes:

Just like any other social media marketing strategy, the first step to creating good memes is to understand your audience.

So, for example, if your brand is targeting millennials or Gen Z, you could create memes around things that they are interested in. That could be a trending TV show or Netflix series.

When using meme marketing, brands need to find a fine balance between promotion and engagement. BarkBox’s marketing campaign got the combination just right. 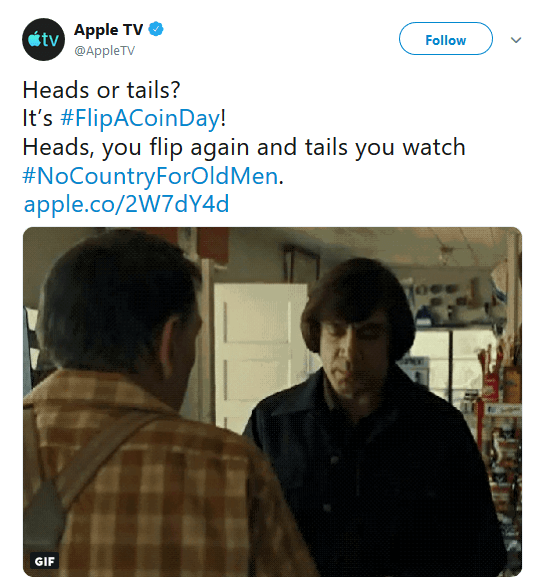 For instance, Apple TV’s audience is interested in movies. So, many of their memes on Twitter have movie references that will resonate with their audience.

Sure, you want to engage your audience by giving them a few good laughs. At the same time, don’t forget that you are using marketing memes. You need to work to increase your brand awareness as well in your digital marketing.

Everyone on social media is already sharing memes. So, to stand out, you’ll have to put in some effort. Instead of just reposting a popular meme, get creative with your digital marketing.

How can you capitalize on trending memes for online marketing purposes?

Understand what the meme implies and try to think of ways to align it with your brand or products. You could incorporate your brand’s slogan, name, mission, or simply a picture into the meme for social media branding purposes.

Ruffles, for example, often weaves their brand name into memes that go viral on social media. This type of meme-jacking can help your brand become more memorable.

3. Keep Up with What’s Trending

Timeliness is a crucial factor with meme marketing on social media. You should watch out for Twitter and Facebook trends to find out what people are talking about across different social media platforms.

If you can manage to create a meme based on the most popular trends at the right time, your are more likely to get a viral meme trending on social media.

American restaurant chain, Denny’s, is known for having a quirky sense of humor. They often find a popular meme and add their own flair to it.

When Apple launched their new Mac Pro, netizens were discussing how it looked similar to a cheese grater. Continuing the chain of jokes, Denny’s came up with a meme on the same topic. 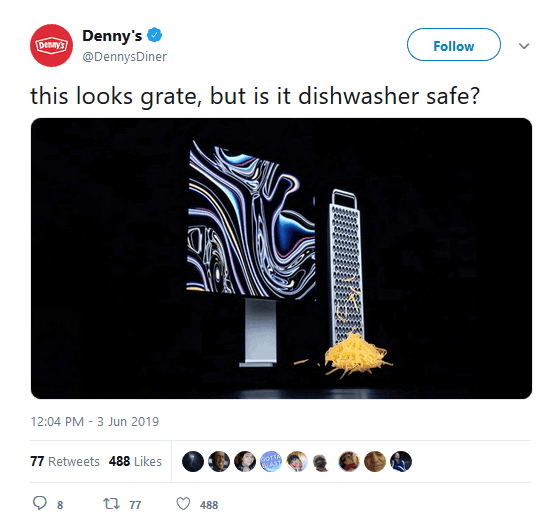 That’s all there is to remember when you’re using meme marketing. Just make sure you resist the temptation to go overboard.

Publish memes sparingly as part of your marketing strategy. Posting a marketing meme every day can make it seem like you’re trying too hard to get the attention of your audience.

Q1. What is meme marketing?

A. Meme marketing is all about using the meme format to promote your brand and products. It involves creating humorous photos, GIFs, and videos that are relevant to your brand and can tickle your audience’s funny bone.

Q2. Why are memes good for marketing?

A. Memes are great for marketing because they are refreshing, relatable, easy to consume and have the potential to go viral. The best part about meme marketing is that you don’t have to spend too much time creating them.

Q3. How can you use memes for marketing?

A. There is no formula for meme marketing. All you need is knowledge of pop culture references, memes, and some creativity.

You can check out the meme marketing examples from various brands in this article to get some inspiration.

Q4. When did Gucci use memes for marketing?

A. Gucci used meme marketing in 2017. They recreated branded memes using the popular format “That Feeling When.” To promote them, they used the hashtag #TFWGucci.

Q5. How do I promote my meme on Instagram?

A. To make sure that your memes get visibility on Instagram, use the right hashtags in combination with your meme marketing.

In addition to this, encourage your followers to tag their friends in the comments section of your meme marketing. You can also reach out to other relevant pages in your niche to publish your memes.

Ready to Use Memes for Brand Promotions?

Meme marketing can be a great way to promote your brand without coming across as too salesy. They’re relatable, cheap to produce, and can increase your brand visibility and engagement.

All you need is to follow the latest trends, the latest memes, and understand what your audience finds funny. You can use design tools to add your brand’s name, slogan, or product in the trending memes.

In which other ways can you gain traction with marketing memes? Please share your views in the comments section below.

Disclosure: This content has a few affiliate links, which means if you click on them, I will get a commission (without any extra cost to you).

The Right Time to Post on Social Media: A Reliable Guide

How to Grow Social Media Organically: 19 Tools You Need To Use in 2023